THE MAGIC OF SOIL 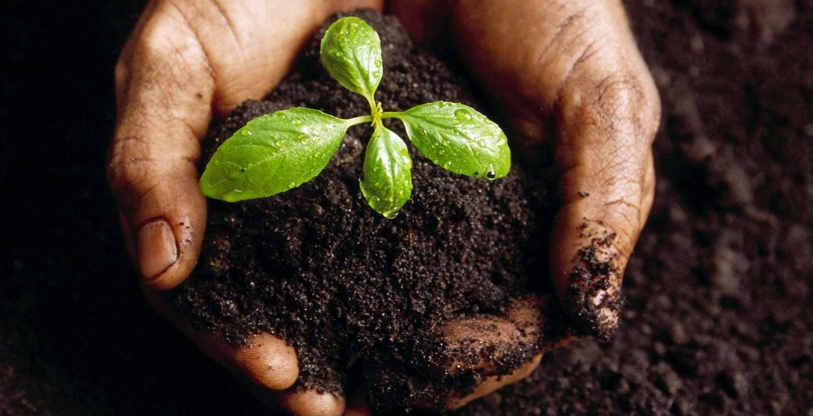 The ground beneath your feet has a lot more mysteries and marvels to it than you might think. There is a thick layer of granite beneath all the continents. This granite gives rigidity to the continental masses, and is the foundation upon which rests the sedimentary strata. This granite also provides a base on top of which are underground river channels, various pockets of minerals, petroleum, etc. Still farther up is to be found the soil which is close to the surface. Air, water, ice, roots, flood, and glaciers all work to crumble the rocks near the surface. Plant and animal remains, and body wastes, add to the mixture, and soil is the result.

When plants die, they decay and form humus, an organic mate- rial that makes the soil more fertile. Animal remains add to the humus. Bacteria in the soil help the plants decay. Animals that burrow in the soil help mix it.

An extremely valuable creature is the earthworm. It swallows soil as it burrows, chews it up, and excretes it again. The result is a finely pulverized soil. Earthworms feed on dead plant material in the soil. The worms help break down the humus the decaying matter in the soil. The necessary air for plant growth enters the soil through the burrows made by the earthworms.

The topsoil is the best soil for growing plants. It is seldom more than a foot deep [30.5 cm]. Below is the subsoil, which may be 2-3 feet deep. This is not as rich, for the earthworms and microbes have not worked it over, and it lacks the humus.

The ideal soil is structured so that each grain is not entirely separate, but sticks together with others in small crumbs. Humus is valuable in helping the soil stick together in this way. A good  soil texture is one in which particles are not too small (clay) or too large (sand, pebbles, or small rocks). The best soils will be a mixture of sand, clay, or silt without too much of either, plus a

THE MAGIC OF SOIL

There are small creatures, bacteria (also called microzyma) which live in the soil and help condition  it.

As the evening cools, dew forms on the plants and ground and waters the earth. Plants reach their roots down into the ground and tap underground water. But the earth has been damaged. The aerial and underground watering system was partially deranged at the time of the Flood. Another problem was depo- sition by flood waters of sections of clay, sand, exposed rock, gravel, and calcite, iron, selenium and other beds. Soils may lack calcium or have too much (and thus be too acid or alka- li).

When too much rain falls, erosion results as soil is carried off. Rain also leaches the soil, taking nutrients downward into the ground. But while the top layer is leached by rainwater, min- erals in the rock beneath it can be reached by plant and tree roots, which draw up more nutrients. In addition, humus can be built up by falling leaves and stalks, and by man as he  works with the soil.

The result is garden plants containing the nutrients needed for life. We plant, tend, harvest, and eat the plants and obtain the vitamins, minerals, carbohydrates, and proteins needed for the sustenance of life. We drink the water from the skies, and bathe our bodies in it. The sunlight falls upon us and deepens our health. Amid all the work, we grow stronger. It is all part of a good plan by One who looked upon the world when it was first made and declared, “It is good.”