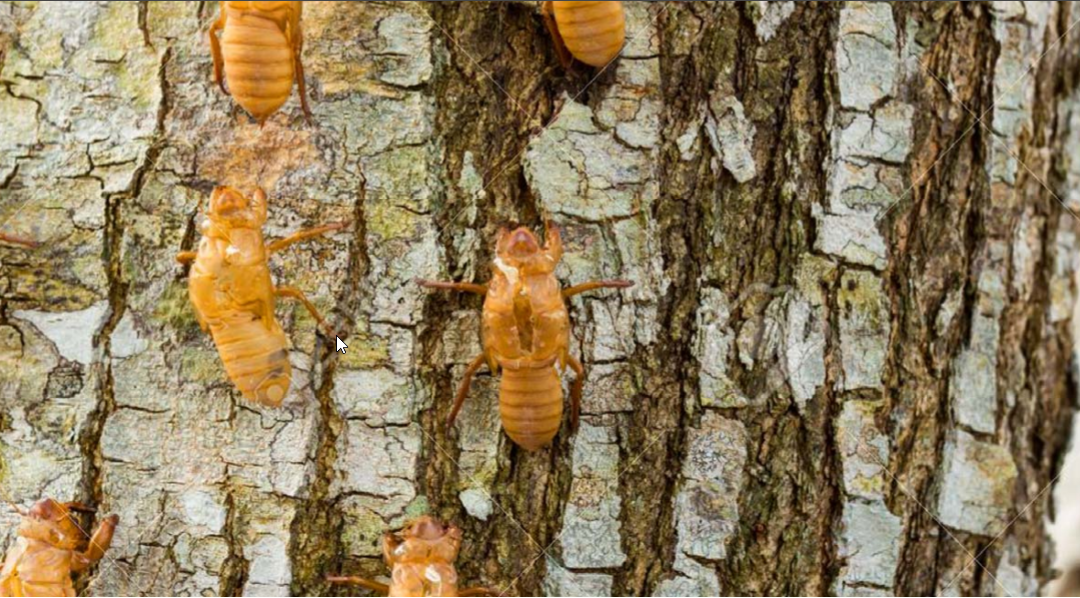 People call these cicadas “locusts” but they are not true locusts — real locusts look like grasshoppers. The phrase “17 year cicada” indicates that they arrive every 17 years. The name “periodical cicadas” indicates that they arrive periodically and not each and every year. The scientific name for the Genus of these cicadas is Magicicada, and there are 3 types of 17 year Magicicadas: Magicicada septendecim, Magicicada cassini and Magicicada septendecula.
There are 13 year cicadas too! Magicicada tredecim, Magicicada neotredecim, Magicicada tredecassini, and Magicicada tredecula. Broods XIX, XXII and XXIII feature these cicadas.
Most 17 Year Cicadas have red eyes, but they can also have white, gray, blue, yellow, or multi-colored eyes
The Massospora fungus infects Magicicadas, filling their abdomens and destroying their ability to reproduce. Often, their entire abdomen will fall off. The cicadas actually spread the fungus throughout their local colony via mating.
They’ll land on you if you’re using a power tool or lawn mower. Cicadas think the sounds made by power tools and lawn maintenance equipment are made by cicadas. They get confused and will land on the people using the equipment! Pro-tip: cut your lawn in the early morning or near dusk when the cicadas are less active.
Cicadas have five eyes: they have the two, obvious, large, compound eyes, and three ocelli. Ocelli are three jewel-like eyes situated between the two main, compound eyes of a cicada. We believe ocelli are used to detect light and darkness. Ocelli means little eyes in Latin.
Wild animals as well as domestic pets will eat them. Dogs will gorge themselves until they choke. Squirrels will eat them like corn on the cob. Wild turkeys will grow fat and juicy on the cicada feast. Fish go crazy for them too — you can use them as bait, or use lures that mimic them.
Cicadas do not eat solid foods — instead they use their slender, straw like mouth parts to drink tree fluids.
That cicada sound: Only male cicadas make the sound they’re famous for. Males have organs on their abdomen called tymbals. Muscles pop the tymbals in and out, which creates the sound we hear. Males make different calls for different reasons, and each species has a unique sound. Females can make sound too — they flick their wings to respond to males.
There are literally billions of 17 year cicadas. Why? One theory suggests that the large number of cicadas overwhelms predators, so predators are never able to eat them all so many of them will always survive to mate. This is a survival strategy called “predator satiation”.
The biggest concern about 17 year cicadas is their potential to damage young trees. The truth is they will damage limbs on the wimpiest of trees, so if you if you have weak, pathetic, wimpy ornamental trees in your yard you should consider placing netting around the trees if the cicadas should visit your yard.  You can try hosing them off with water, placing insect barrier tape around the trunk of the trees, or picking them off like grapes! Or, plant strong, beefy American trees. Cicadas actually benefit the health of trees by aerating the soil around the roots, and trimming the weak or damaged limbs.
Scientists speculate that one reason why these cicadas emerge in 17 or 13 year cycles is because those are prime numbers. The fact that 13 & 17 are relatively large prime numbers makes it difficult for predators to synchronize with them.
Annual cicadas that arrive every year often have wasps specialized to prey on them; periodical cicadas however have no such wasp.
They use their color to warm up: Cicadas need to be warm to sing and fly around, but they’re cold blooded. Their dark skin absorbs the heat of the sun, which helps to warm them up.