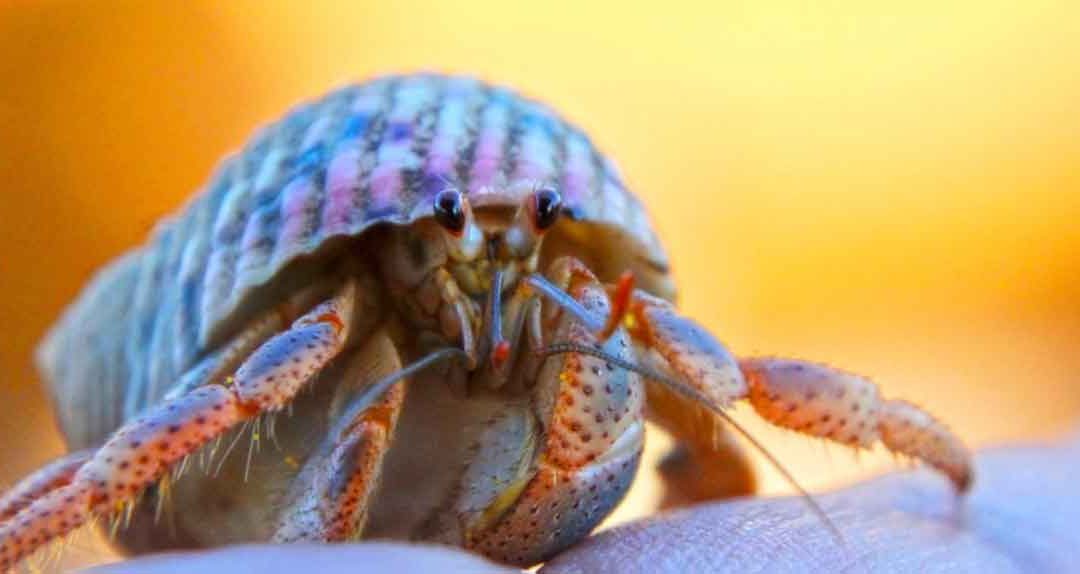 –The Hermit Crab is a small crab which lives in the shallower parts of the ocean. It spends its first year in the ocean as a gill breather. For its second year, it lives on trees and occasionally gets into the water to get its gills wet, even though it can already breathe out of water.

Thereafter, it spends its full time in the ocean, often in rock pools near the ocean’s edge. The hermit crab has no shell as do other crabs. Instead, it has to go out and find one. When it finds an empty snail or conch shell, it crawls inside to check it out for size. If it is okay, it then walks around, lugging the borrowed shell on its back. When enemies lurk near, it crawls back into its protective shell. Since its right claw is the larger, it will tuck that in front of it as a protective doorway across the shell’s entrance. The left claw is smaller and used to tear up food, which consists of small plants and animals.

As it grows, it continues to be on the lookout for larger-sized shells. When it changes shells, it moves rapidly! If the size is wrong, it quickly darts back into the safety of its previous shell.

The tentacles of the sea anemone are poisonous and sting those that touch it. But the little hermit crab and the sea anemone always know they are good friends. The crab crawls over to a small anemone and pushes on him. Instead of stinging the crab to death, the anemone carefully places its bottom suction cup onto the crab, and off they go, with the crab carrying the anemone around on its shell!

This arrangement helps both of them. It provides even better protection for the hermit crab, and additional food for the anemone. When the anemone catches a fish with its stingers, both share the food. The crab reaches his pincer out and takes part of the catch. When the crab catches a fish, it in turn shares part of it with the anemone. Sometimes the crab will carry two anemones around on its shell!

When the hermit crab switches shells and finds that the new one is better, it nudges the anemone, which knows to crawl off the first shell and onto the second one.