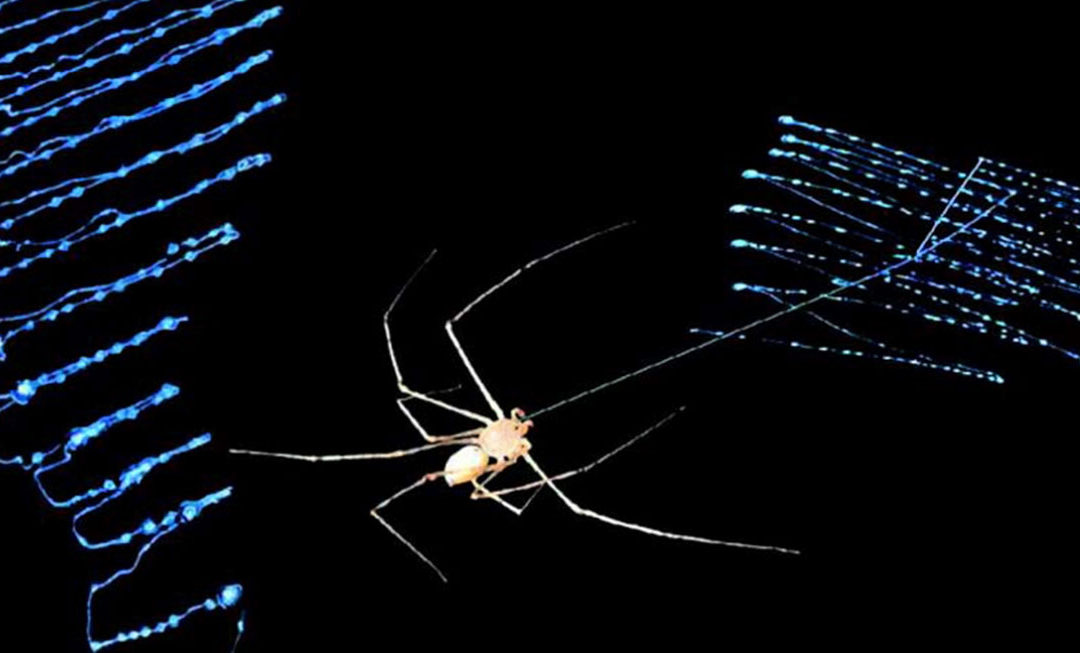 Spiders go higher in the sky than any other living creature on our planet. This is part of their way of taking long-distance journeys to new lands.

The mother spider carries her babies in a brown bag. Inside the bag are about 200 baby spiders, each one the size of a dot. There is lots of food inside the bag. After they are one day old, they will come out from the bag and immediately all will leave in different directions. If they did not do this, they might begin eating up each other. (One exception to this is a certain spider which carries her newborn babies on her back for a time before they leave home. They are all crowded together, not in a bag, and do not disturb one another.)

Now, how does the tiny baby spider go about leaving home? That is simple enough, he crawls up to a high point. It may be a grass stem or the side of a tree trunk, or a leaf on a plant. Then he upends and off he goes!

Even though he is only a day old, his little silk factory is in full operational order. Instead of a tail, the spider has a spinneret. Lifting this up in the air, he begins spinning his fine thread which catches in the wind. The wind carries away the thread as the baby keeps reeling it out. Soon enough thread is in the air (about 9 feet [27 dm] of it), and the baby is lifted off its feet and goes sailing! This thread is actually a liquid which immediately hardens when the air touches it. For its size, the thread is as strong as steel; in fact it is stronger, for it can stretch without breaking.

When did he learn all this; he was only born that day! But he knows still more. The tiny spider quickly commandeers his craft and begins steering it! As soon as he becomes airborne, he climbs up on the silk line and walks on that fluttering thing as it is flying high! How he can do this and not fall off is a mystery (how he can even hang on is a wonder). But he quickly becomes master of the airship. Arriving about half-out along the line, he pulls on it, tugs it here and there, and reels it underneath him. In this way, the line now becomes a rudder which he uses to steer up or down! Where did a one-day old, with a brain one-thousandth as large as a pin-head, get such excellent flying instruction?

Soon he lands on something, but generally he will only stop long enough to prepare for another flight, and off he goes again.

Scientists in airplanes have found baby spiders 16,000 feet [4,876 m] up in the air! That is 3 miles [4.8 km] high! Eventually the tiny creature will land. It may be several miles down the road, in a neighboring state, or on an island far out at sea. By the way, spiders are the first creatures to inhabit new volcanic islands.