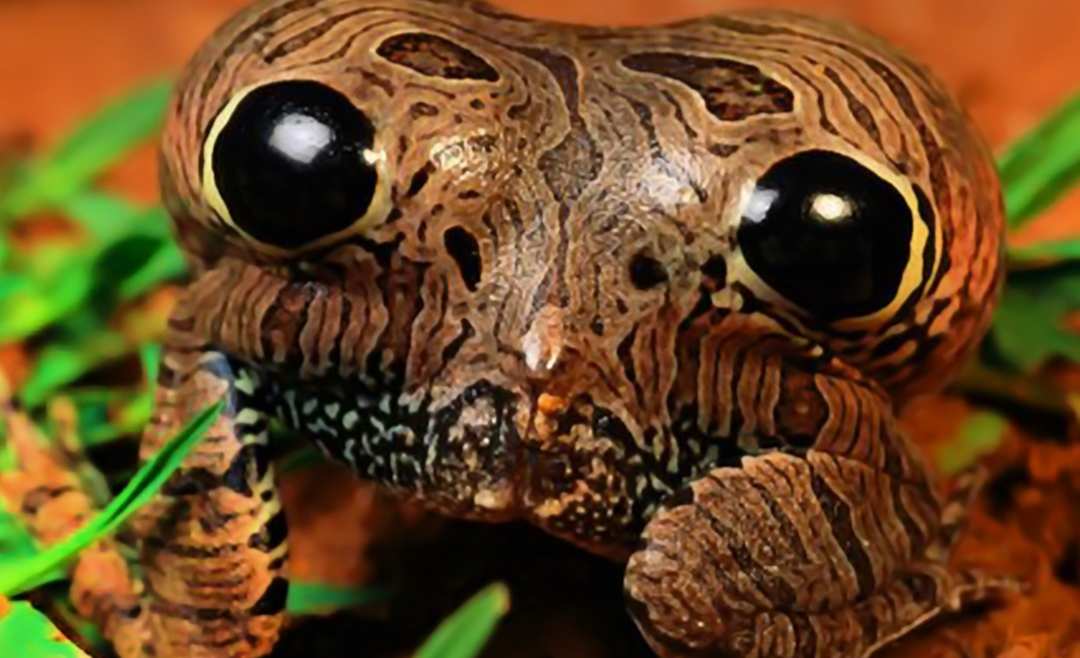 The South American false-eyed frog is an interesting creature. Generally about 3 inches long, it is brown, black, blue, gray, and white! Drops of each color are on its skin, and it can suddenly change from one of these colors to the others, simply by masking out certain color spots.

The change-color effect that this frog regular produces is totally amazing, and completely unexplainable by any kind of evolutionary theory.

The frog will be sitting in the jungle minding its own business, when an enemy, such as a snake or rat, will come along.

Instantly, that frog will jump and turn around, so that its back is now facing the intruder. In that same instant, the frog changed its colors!

All of this looks so real-with even a black pupil with a blue iris around it. Yet the frog cannot see any of this, for the very intelligently-designed markings are on its back!

The normal sitting position of this frog is head high and back low. But when the predator comes, he quickly turns around so that his back faces the predator. In addition, the frog puts its head low to the ground, and raises hind parts high. In this position, to the enemy viewing him, he appears to be a large rat’s head! In just the right location is that face, and those eyes staring at you!

The frog’s hind legs are tucked together underneath his eyes-and they look like a large mouth! As he moves his hind legs, the mouth appears to move! The part of the frogs body that once was a tadpole’s tail-now looks like a perfectly formed nose, and it is in just the right location!

To the side of the fake face, there appear long claws! These are the frog’s toes! As the frog tucks his legs to the side of his body, he purposely lifts up two toes from each hind foot-and curls them out so they look like a couple of weird hooks.

And the frog does all of this in one second!

At this, the predator leaves, feeling quite defeated. But that which it left behind is a tasty, defenseless, weak frog which can turn around quickly, but cannot hop away very fast.

The frog will never see that face on itself, so it did not put the face there. Someone very intelligent put that face there! And the face was put there by being programmed into its genes.

Well, there it is. And it is truly incredible. How could that small, ignorant frog, with hardly enough brains to cover your little fingernail, do that?

Could that frog possibly be intelligent enough to draw a portrait on the ground beneath it? No it could not. Could it do it in living color? No!

Then how could it do it on its own back? It cannot see its back, just as you cannot see yours. The task is an impossible one. And, to make matters more impossible, it does it without hands! Could you, unaided by devices or others, accurately draw a picture on your back? No. Could you do it simply by willing colors to emerge on the skin? A thousand times, No.

What a magnificent Creator!